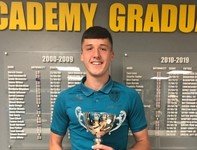 Cardinal Heenan would like to say a massive congratulations to Oliver Casey, past pupil, who this week received apprentice of the year at Leeds United. Oliver signed his professional contract for the club earlier in the season and it looks like he's going from strength to strength! We wish him all the best for next season and beyond...maybe in the Premiership!?